WASHINGTON, D.C. – On Thursday, Sept. 22, AmeriCorps, the federal agency for national service and volunteerism, Volunteer Louisiana and Teach for America NOLA hosted a city-wide AmeriCorps member swearing-in event and volunteer recognition ceremony in New Orleans. During the event, Michael D. Smith, AmeriCorps CEO and Ge’ron Tatum, Teach for America NOLA executive director gave remarks about national service and volunteerism in Louisiana. Smith then led AmeriCorps members from across the city in the AmeriCorps pledge to kick off their year of service. Smith also awarded the President’s Volunteer Service Lifetime Achievement Awards to two New Orleans-based volunteers who have served thousands of hours across multiple organizations.

“For the past 19 years, the President’s Volunteer Service Award has inspired countless people to enact change, which highlights the enduring spirit of service,” said AmeriCorps CEO Michael D. Smith. “I was honored to recognize Craig Blackburn and Ed Brannan for their decade's long commitment to service in the New Orleans community. Thank you both for sacrificing your time and demonstrating service as a uniting force.”

Led by AmeriCorps and managed in partnership with Points of Light, the President’s Volunteer Service Award allows organizations to recognize their most exceptional volunteers based on service over a 12-month period or a lifetime. The awards program began in 2003 and honors individuals whose service positively impacts communities in every corner of the nation and inspires others to act.

Currently, more than 470 AmeriCorps members and 380 AmeriCorps Senior volunteers serve at more than 120 locations in New Orleans. Last year, the city received more than $2.6 million AmeriCorps funding, which was matched with nearly $1.5 million in local support. 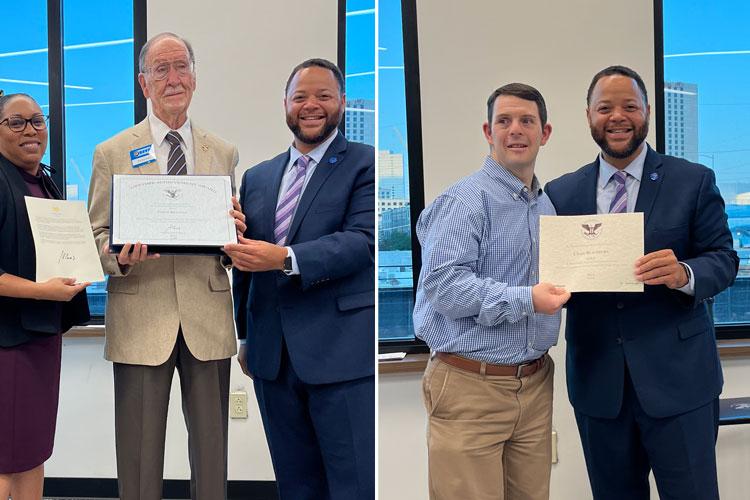 AmeriCorps, the federal agency for national service and volunteerism, provides opportunities for Americans to serve their country domestically, address the nation’s most pressing challenges, improve lives and communities, and strengthen civic engagement. Each year, the agency places more than 250,000 AmeriCorps members and AmeriCorps Seniors volunteers in intensive service roles; and empowers millions more to serve as long-term, short-term, or one-time volunteers.