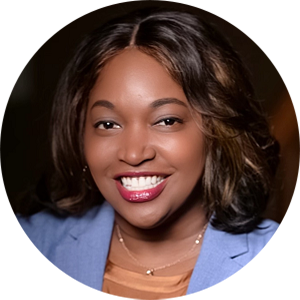 A proud military veteran, Tobin brings more than 17 years of leader development, project management, community engagement, public speaking experience, and a passion for addressing social justice issues that affect underserved communities. Most recently, she served as executive director, East Region of The Mission Continues. She has been featured in major publications for her thought leadership on diversity and inclusion and has lectured widely on topics including poverty, diversity, and leadership. She is a combat veteran, having served 10 years in the United States Army as a communications officer, including two combat tours in Iraq.

Her previous roles include senior project manager for the U.S. Department of Housing and Urban Development, President’s management council fellow in the Department of Treasury, and chief operations officer of the Kids Hope Alliance. Tobin is a graduate of the United States Military Academy at West Point and the New York Institute of Technology.