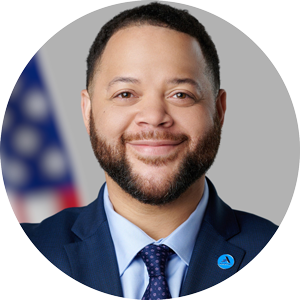 Michael D. Smith is the eighth CEO of AmeriCorps, the federal agency for service and volunteerism formerly known as the Corporation for National and Community Service. Smith was nominated by President Biden in June 2021; confirmed by the U.S. Senate in December 2021; and officially started in January 2022.

Smith has dedicated his career to social justice and public service in underserved communities like those where he grew up. Most recently, he served as executive director of the My Brother’s Keeper Alliance and director of Youth Opportunity Programs at the Obama Foundation. In these roles, Smith led the foundation’s efforts to reduce barriers and expand opportunity for boys and young men of color, their families and other underserved youth. Smith was part of the team that designed and launched the My Brother’s Keeper initiative in the Obama Administration, and was appointed special assistant to President Obama and senior director of cabinet affairs, managing the initiative and interagency task force at the White House.  My Brother’s Keeper led to new federal policy initiatives and grant programs; tens of thousands of new mentors; more than 250 MBK communities in most states, D.C., Puerto Rico, and 19 tribal nations; and, more than $1 billion in private sector and philanthropic investments.

Prior, Smith was a political appointee in the Obama Administration serving as director of the Social Innovation Fund, a key White House initiative and program of the Corporation for National and Community Service. He reinvigorated the initiative, managed its largest funding competition, introduced its first Pay for Success grant program, and oversaw a portfolio of more than $700 million in public-private investments in support of more than 200 nonprofits. Prior, Smith served as senior vice president of Social Innovation at the Case Foundation, where he oversaw the foundation's domestic giving and program strategy, and guided numerous global public-private partnerships. Earlier in his career, he helped build national initiatives aimed at bridging the “digital divide” at the Beaumont Foundation of America and PowerUP, served as a senior staff member at the Family Center Boys & Girls Club, and was an aide to U.S. Congressman Richard E. Neal.

Smith is a Senior Atlantic Fellow for Racial Equity and a member of Boys and Girls Clubs of America’s Alumni Hall of Fame, the highest honor bestowed by the organization. Prior to his government service, he served on the board of directors of Results for America, Venture Philanthropy Partners, Public Allies, Idealist.org and Philanthropy for Active Civic Engagement. Smith earned his bachelor’s degree in communications from Marymount University, Va., and resides in Springfield, Va.